How do we feature your favourite film characters in our TV ads?

This article was written by Matt Lewis.
Lead Creative @ FOTW

In this article we explain the secrets behind how we’ve featured a bunch of very recognisable characters, in some of our favourite ads!

For many years, we have been creating some awesome adverts featuring key characters from films like The Lego Batman Movie, X-Men which we directed and filmed, Minions, Despicable Me, Inside Out, The Incredibles and Kung Fu Panda. Having our heroes interact with our messages is awesome, it allows us to create much more engaging adverts, and here are a few steps we do to make the most of our famous digital friends.

We are supplied a video toolkit of assets created by the major animation studios. The character animations are given to us, as separate video files, with no backgrounds. Think of them as animated cardboard cutouts. Lovely right! Well…that’s where the first challenge begins. This ‘toolkit’ of assets must be used as supplied, they can’t be re-animated, flipped, re-timed, re-colored etc. Each clip is separate and the actions might not be related.

We take these different assets and create a narrative around them, where we can land our key messages and create environments and settings where they would naturally appear. Using their movements and motions to take us on a mini adventure that flows naturally.

A video toolkit sounds big…but in fact it may just be several different short clips. And sadly the characters won’t always be walking in and out of shot perfectly, or the duration is 2 seconds shorter than you ideally wanted. So how do we make them work seamlessly in our ads?

Know what you’ve got

It’s essential to get to know your clips well – get them all together and review them a lot. Study their movements and see which have the most potential. Little body movements or actions can help develop the script you write for that scene and link it together.

Here is an example of the toolkit asset of Gru from Despicable Me. As he pushes a huge button to start a machine we hear the voice over say “Turn on great Fibre”.

The video assets are your visual building blocks, but they don’t have to dictate your narrative. You can use them in different orders, positions and duration’s. Don’t think of them as stand alone assets, you build the setting around them and can put pop props in front, behind and in-between them!

When we created the Secret Life Of Pets advert we had to use the animals within their world, from a giant bone with a message on, to a dog toy that bounces from scene to scene which the pets interact with, and gave a simple narrative thread to follow.

Getting the clips to work for you.

It’s time to think a little differently with these restricted assets. As you can’t reanimate the characters, you need to use their existing movements and re-frame them. Their movements can be best used to add charm and motion to your scenes.

Below is an advert showcasing a couple of examples using the same clip of Dash, from The Incredibles.

At the beginning of the ad there is a blur as Dash runs past the screen in a blur. This allows us to follow after him, leading the camera into the next scene. Later in the same advert we see a slightly earlier part of this sequence where Dash waves, then runs off screen. This time we don’t follow him, as his speedy sprint has caused pieces of paper to be whisked up, allowing us to display a new message on screen.

And if you are lucky to have soundbites from the assets, then think how their verbal interaction can play with your Voice Over script.

Your assets have personality by the bucket load, and could easily steal the show. So considering where you use them is essential. They may well be restrictions about their usage set by the Studios, which you must abide by. The balance of using them as entertainment elements, and landing your messages is vital. You want your audience to remain engaged but to also ensure they take out the messaging!

Finding that balance is essential to keep the viewer engaged, but not distracted with all the cool action.

So where do I start?

Creating a basic Voice Over script will help block out what messages you need to land. See which clips or character traits can support and compliment each message. Scamp out the flow or create an animatic to see if the clips will fit your basic duration’s. Often clips are short, so think creatively how you can reveal your characters. Some might not walk or run into shot, so quick camera movements to these might be the easiest way to introduce them.

Location of your characters is essential, and this a key element we add. They must feel natural to the character, but just because they are grounded, doesn’t mean they have to be at ground level! They could be running along a roof top of a sky scrapper… 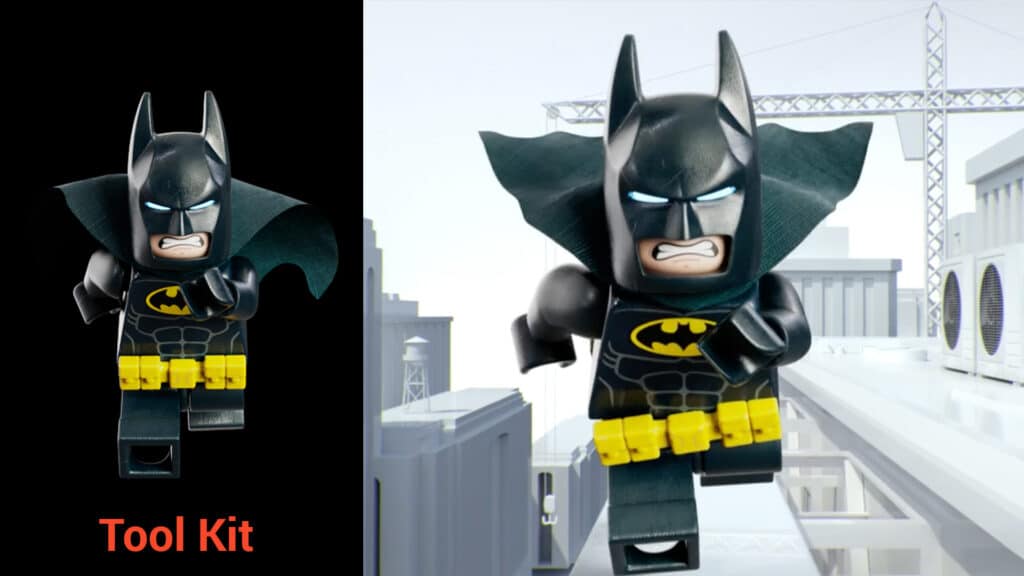 So get to know what you’re working with, and take the characteristics of the animation to help develop the story and copy writing. Keep it simple to allow the sequences flow together.

Don’t feel restricted, take on the challenge when using a toolkit, and think about fun ways the separate elements can come together seamlessly.

Here are some of our favorite ads that used supplied tool-kits brilliantly: